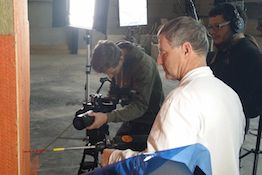 The pilot film for the conclip video clip platform, a test video of the intended ConClip series with the topic „Insulation", was filmed at the Bauakademie Lehrbauhof in Salzburg Austria. Apprentices, training in their third year at the vocational training centre, helped prepare the project by building a life size model of a brick wall and window in one of the workshop halls. To get the light right the film crew, which arrived at 6am, had to wait till 9am for the sun to properly light the hall. The filming took the whole day, but with the experience from this first film the filming of the following clips should just last half a day. Due to the good preparation made possible by the detailed screenplays the filming went smoothly. Altogether eight people participated in the production: a facade worker and company consultant, the film crew and assistants and BM Elischa Grünauer, the ConClip agent at the Bauakademie Lehrbauhof. After this first ConClip is approved by the ConClip consortium the following ConClips will soon be going into production.